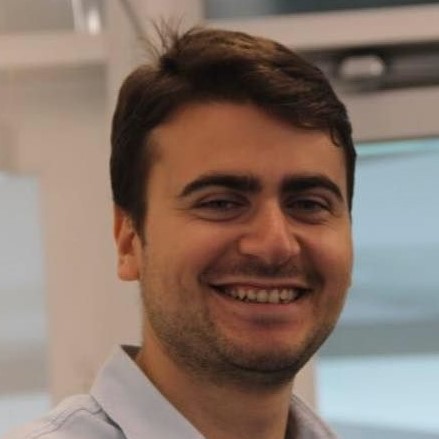 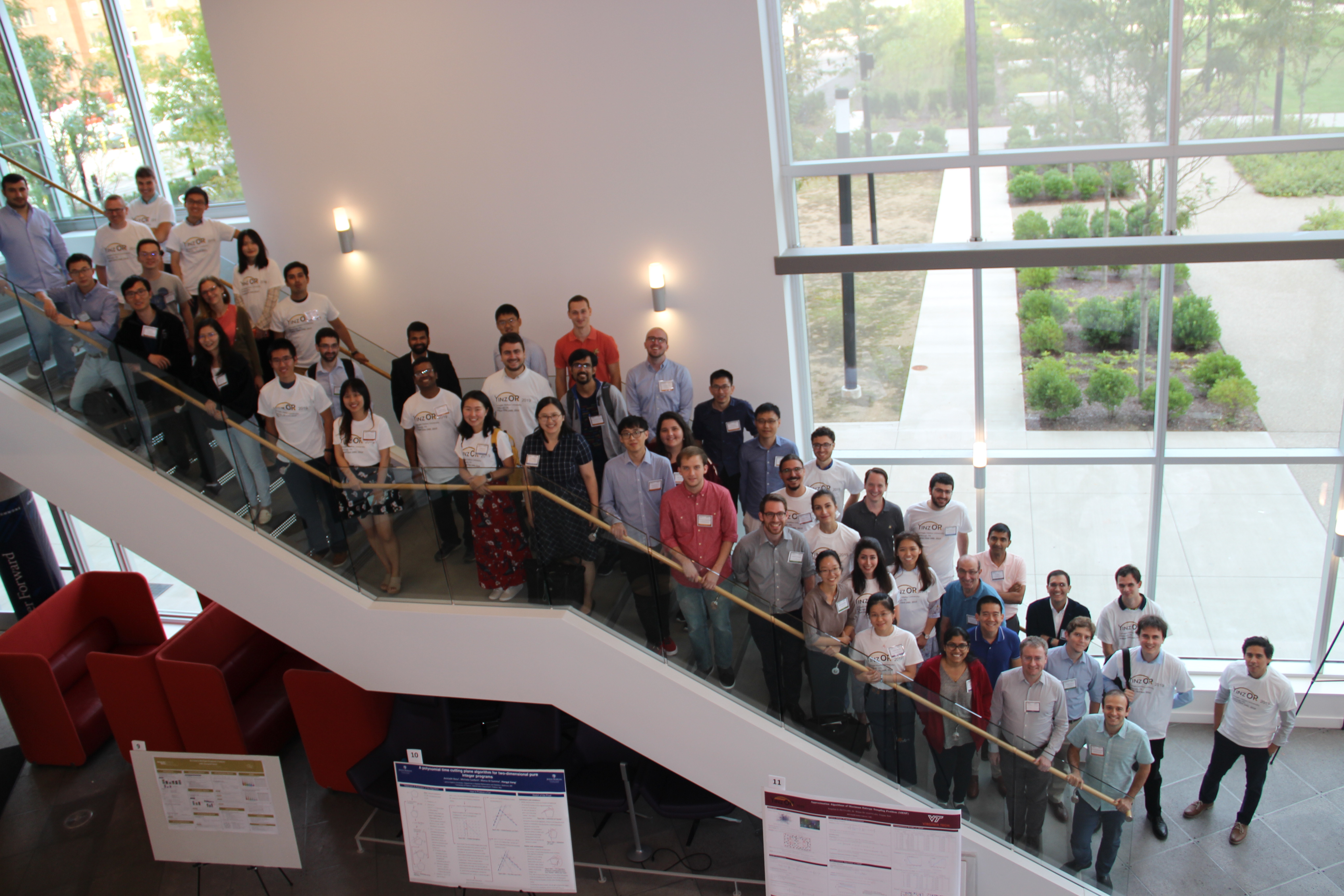 The INFORMS Student Chapter at Carnegie Mellon University hosted YinzOR 2019 on August 23-24 at Tepper School of Business, Carnegie Mellon University. This year’s conference attracted many sponsors which enabled our chapter to expand its reach to researchers from numerous outstanding universities in the US. We thank our Silver sponsors FedEx and McKinsey and Company, and Bronze sponsors Tepper School of Business and Simio for their generous contributions to YinzOR 2019. We are grateful to our faculy Sridhar Tayur and Willem-Jan van Hoeve for their efforts in connecting us with the sponsors.

A nomination and voting process was used by the organizing committee to choose and invite excellent young researchers from various institutions. We were excited to have a diverse group of speakers from Carnegie Mellon University, MIT, Georgia Tech, Cornell University, University of Chicago, Columbia University and Bucknell University. 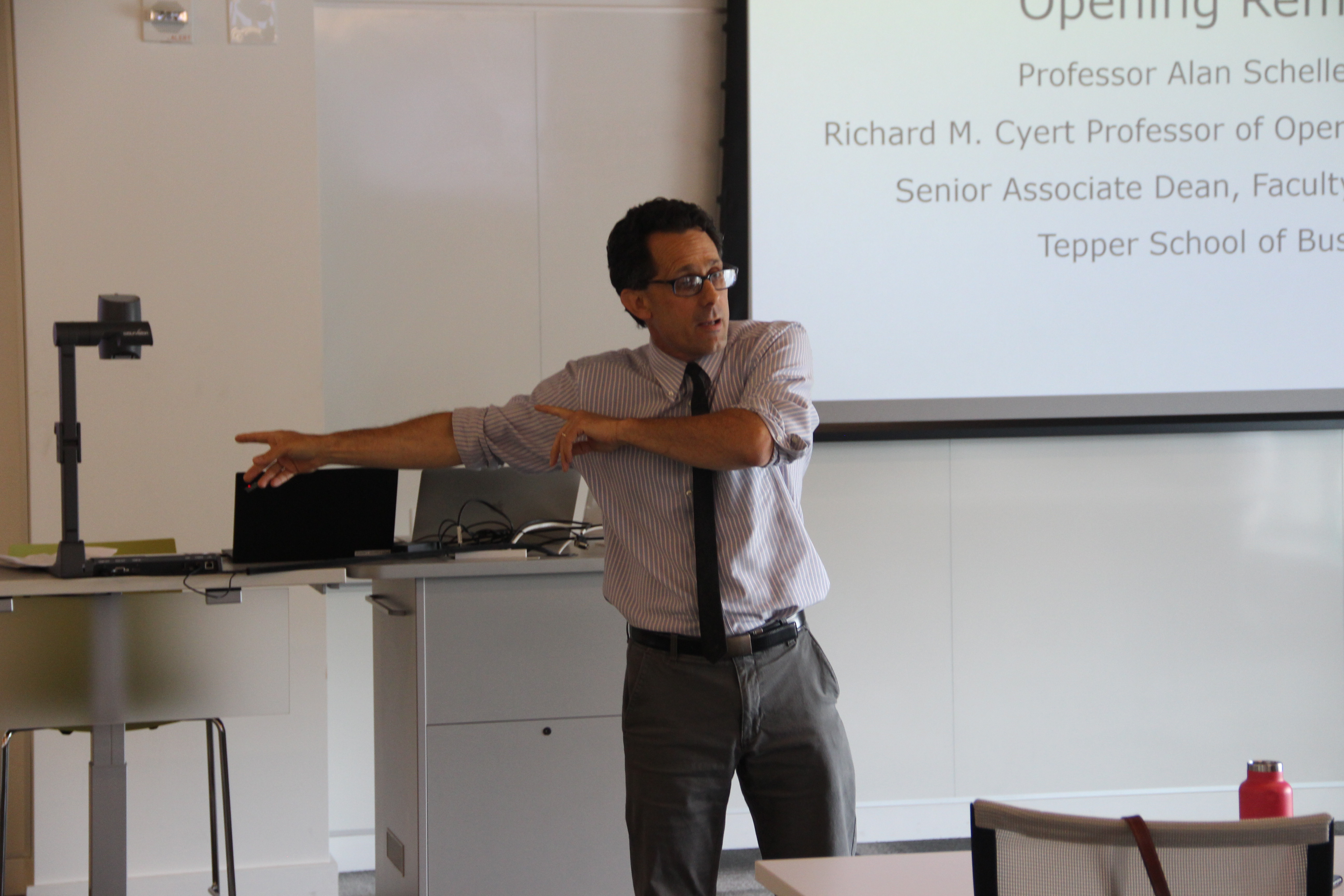 On Friday August 23, Alan Scheller-Wolf, currently the Senior Associate Dean, Faculty and Research at Tepper School of Business, kicked off YinzOR with Opening Remarks. He started by praising the efforts of our chapter in organizing the event. He further added that given that we do have any direct monetary/career incentives to organize the event, we are in some ways making the world a better place through YinzOR. He talked about the fast-changing nature of OR field and the importance of keeping up with the changes while pursuing one’s own research interests to become unique in the field. He concluded his talk stressing on the importance of applying OR in real-world problems to contribute to the society. 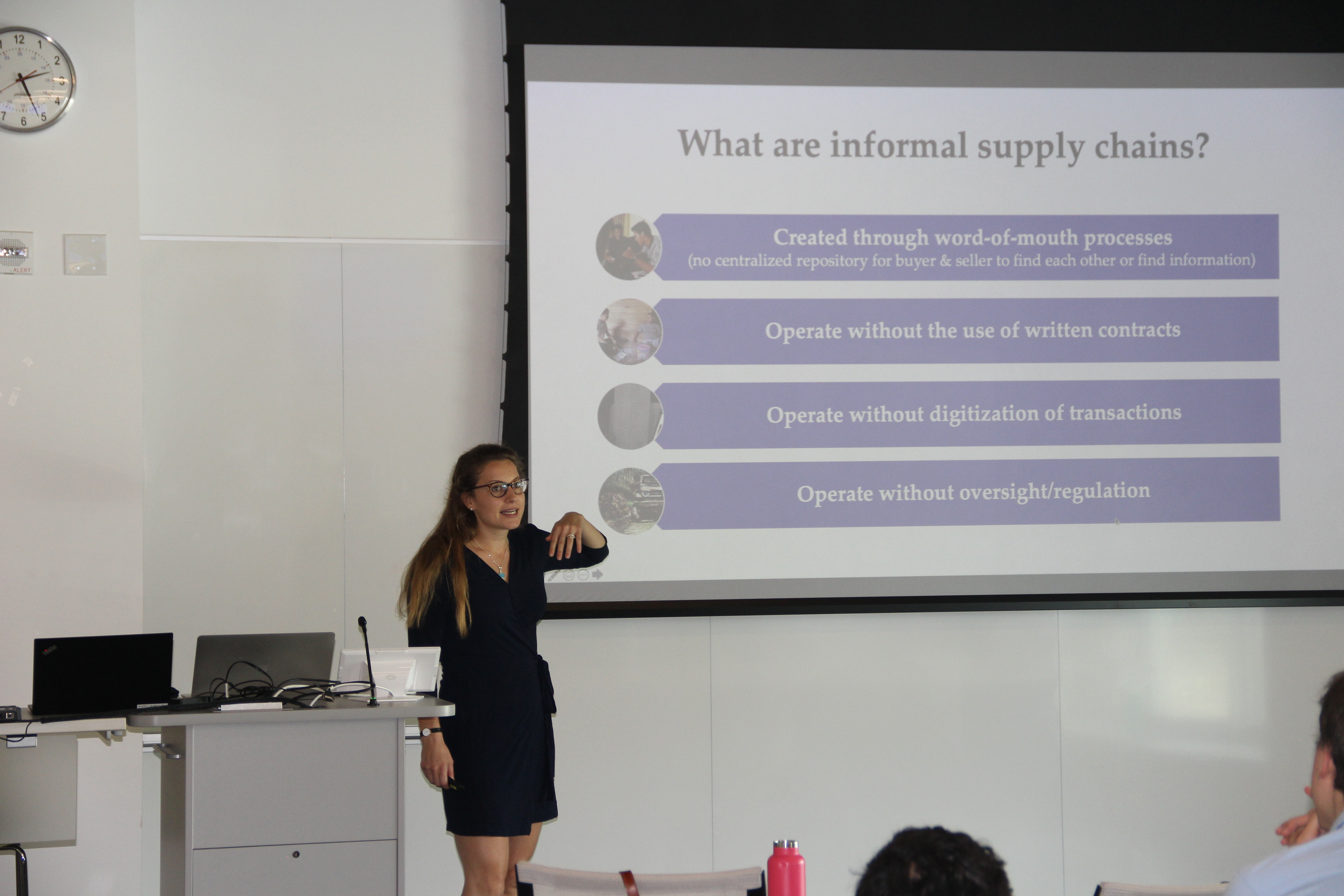 Dean Scheller-Wolf’s opening remarks was followed by a featured talk by Joann de Zegher from MIT Sloan. Joann presented her work on optimizing informal supply chain operations as a means to crowdsource information about them. She showed her case study on the first mile of palm fruit production in rural Indonesia. 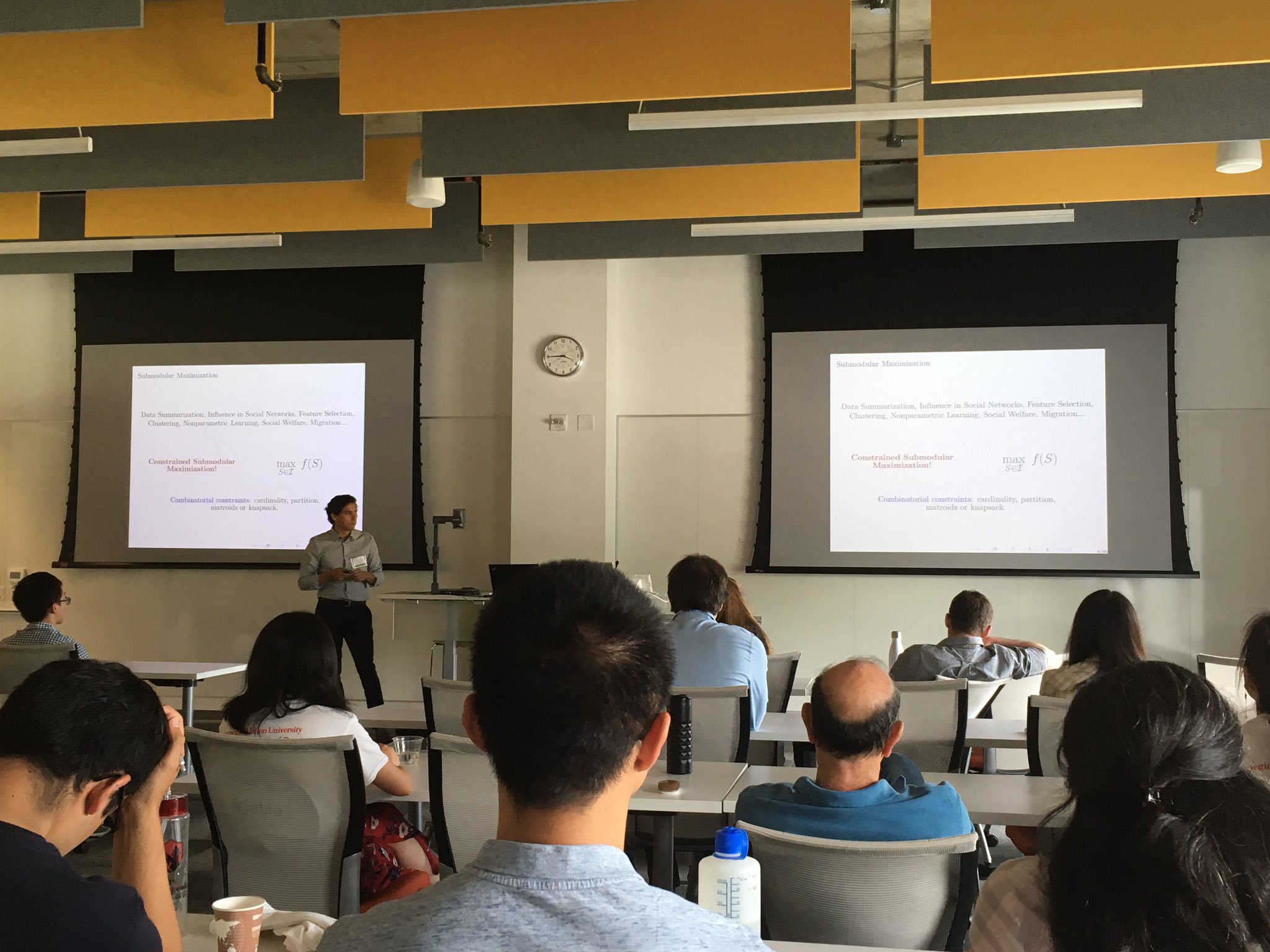 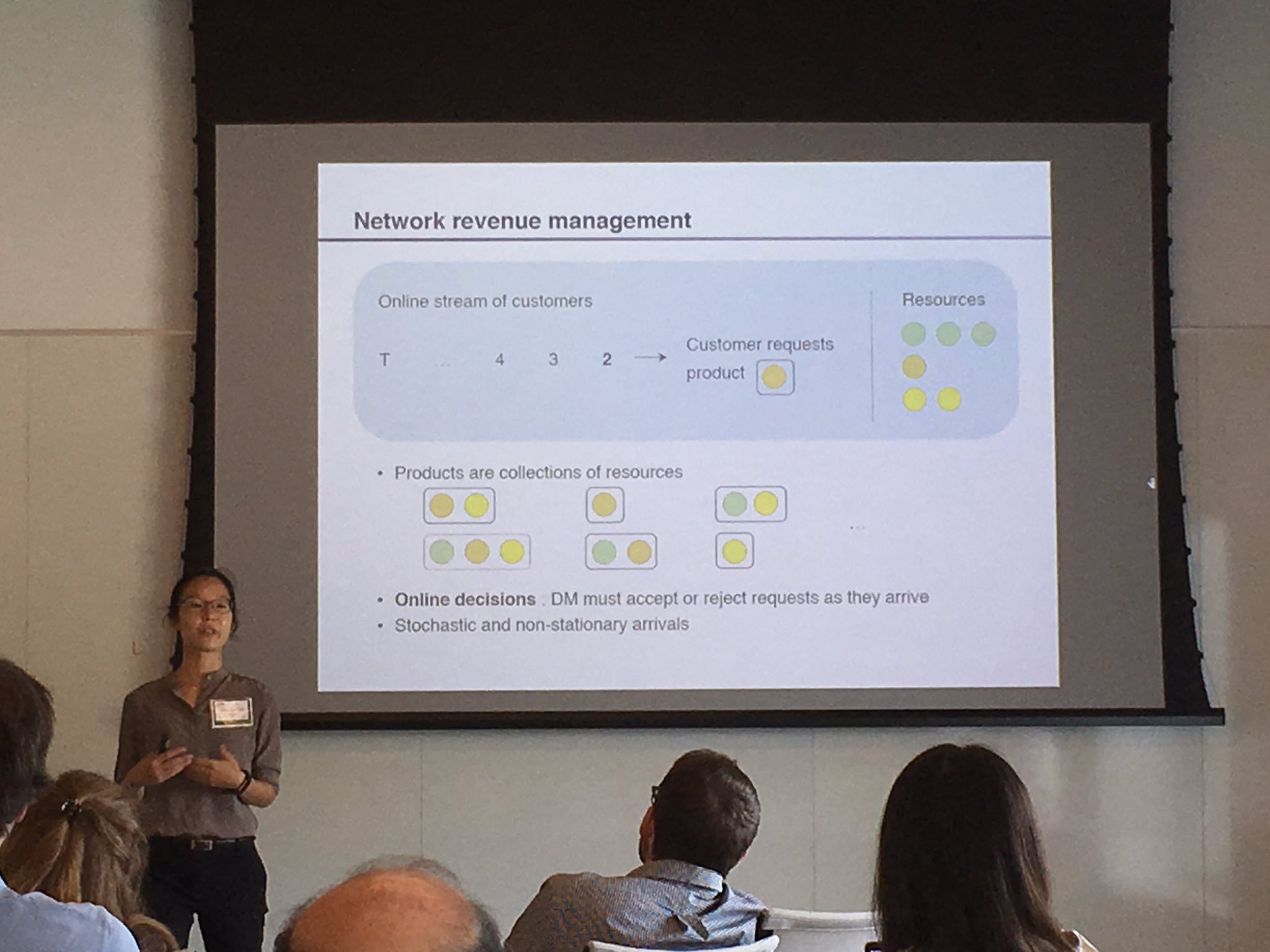 Alfredo talked about his work on submodular optimization where their goal is to explain why the greedy algorithm for submodular optimization performs so well in practice with the sharpness concept they borrow from continuous optimization. Mika presented her work on network revenue management where requested products are pairs of resources with applications on airline and hotel bookings. 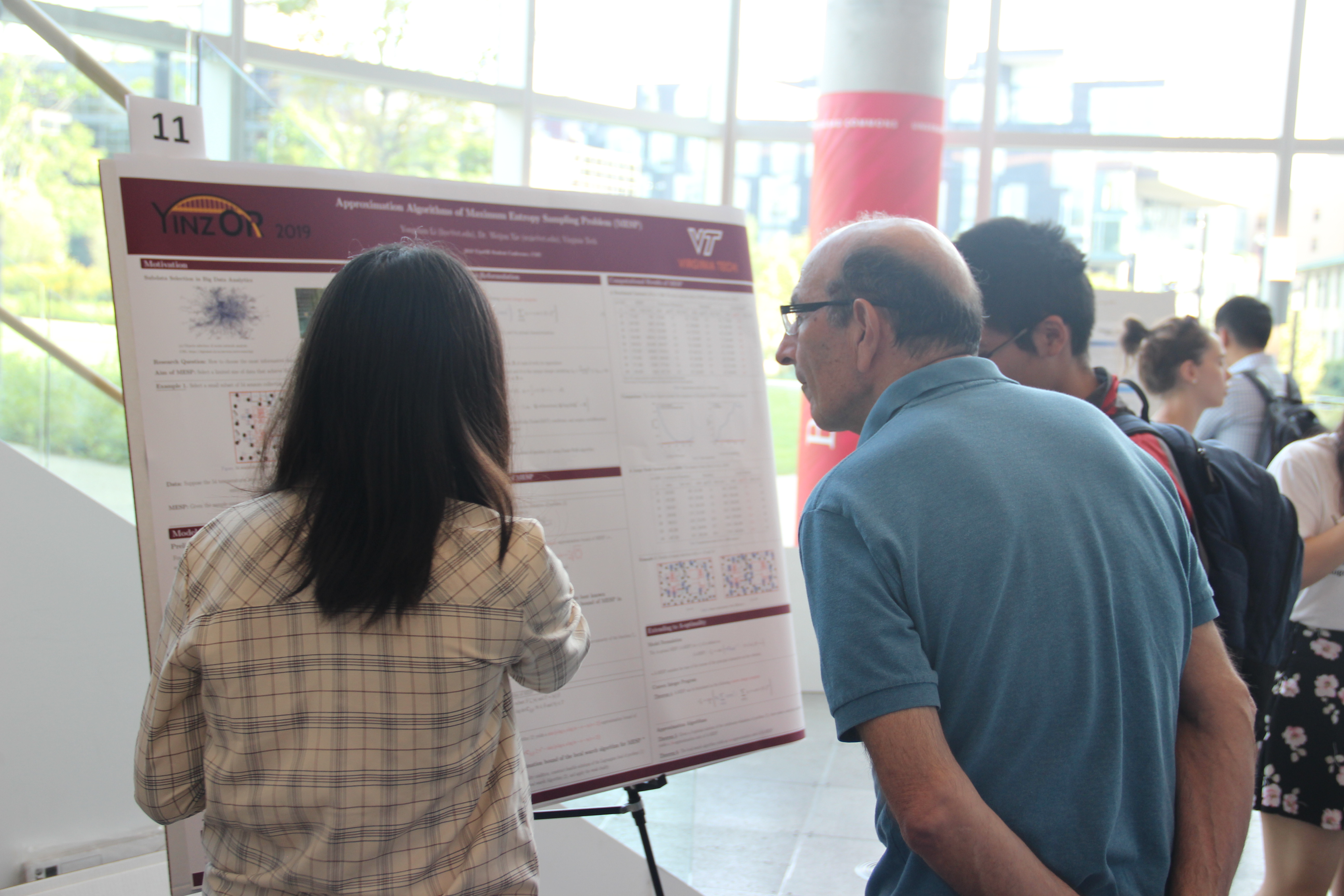 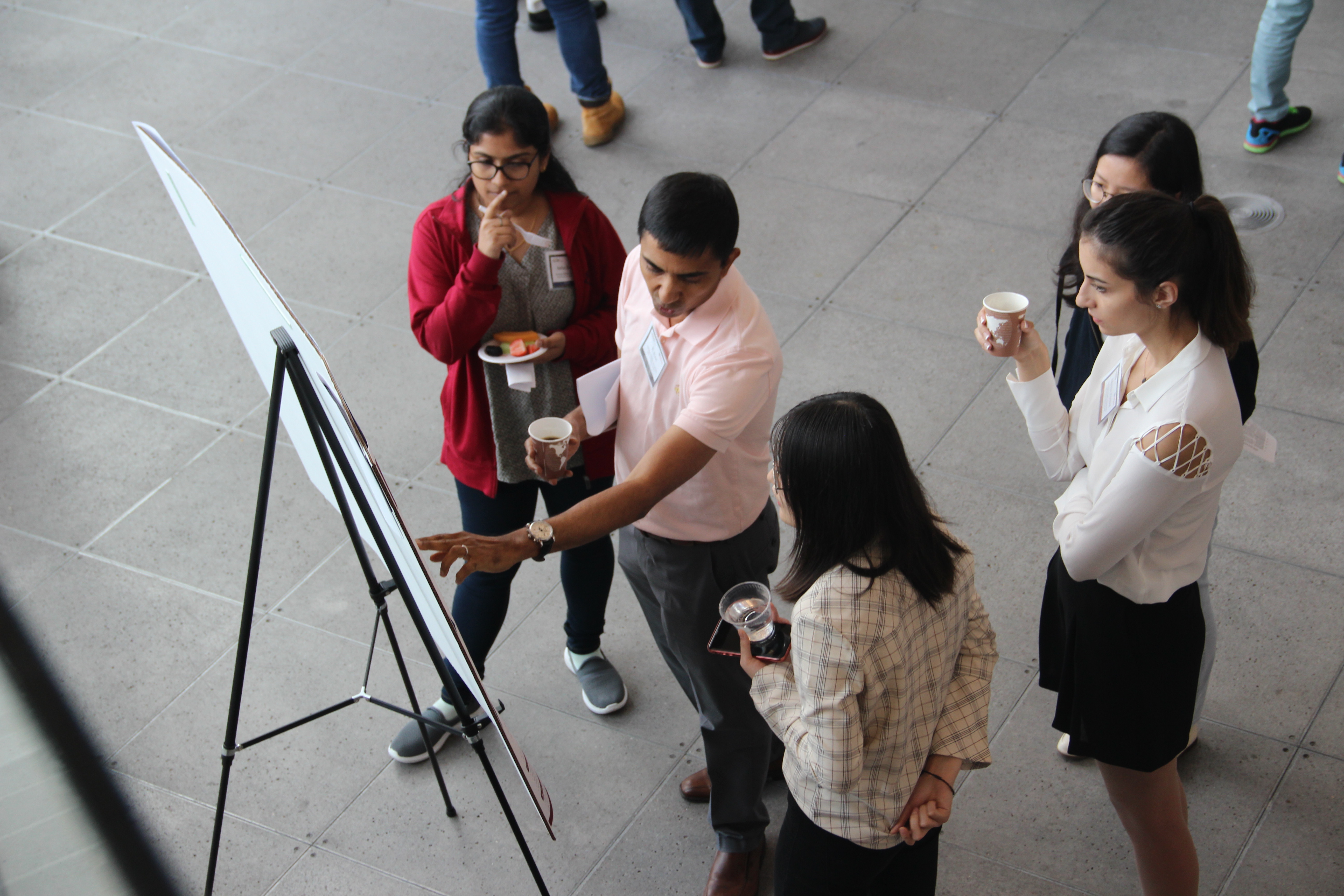 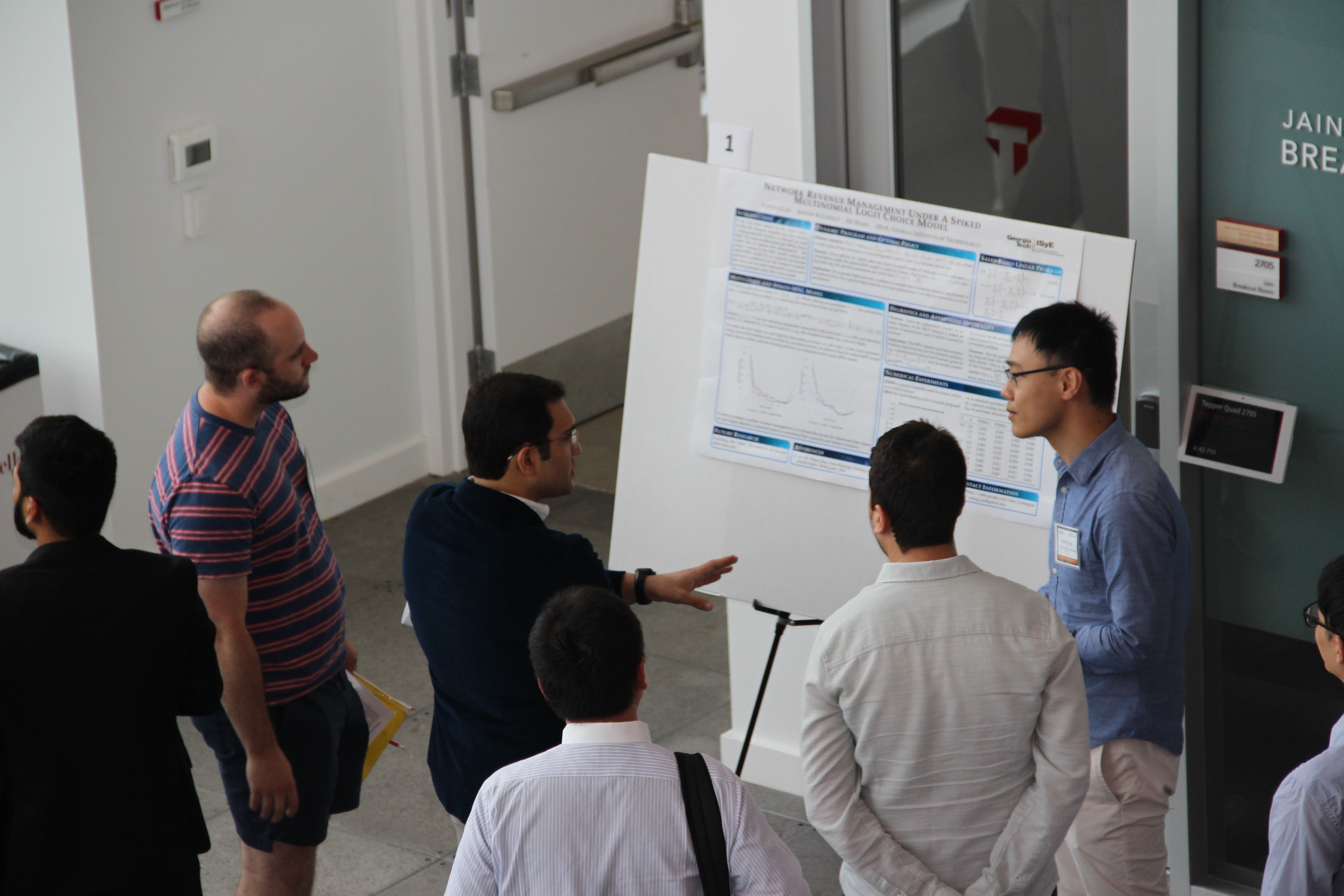 The panel of judges for the poster competition consisted of two CMU and one University of Pittsburgh faculty members: Gerard Cornuejols, R. Ravi and Arian Aflaki. In a tough competition, Dravyansh Sharma won the first prize.

During the poster competition, FedEx OR Group hosted a booth where they introduced their operations, ongoing OR projects and job/internship opportunities to conference participants. 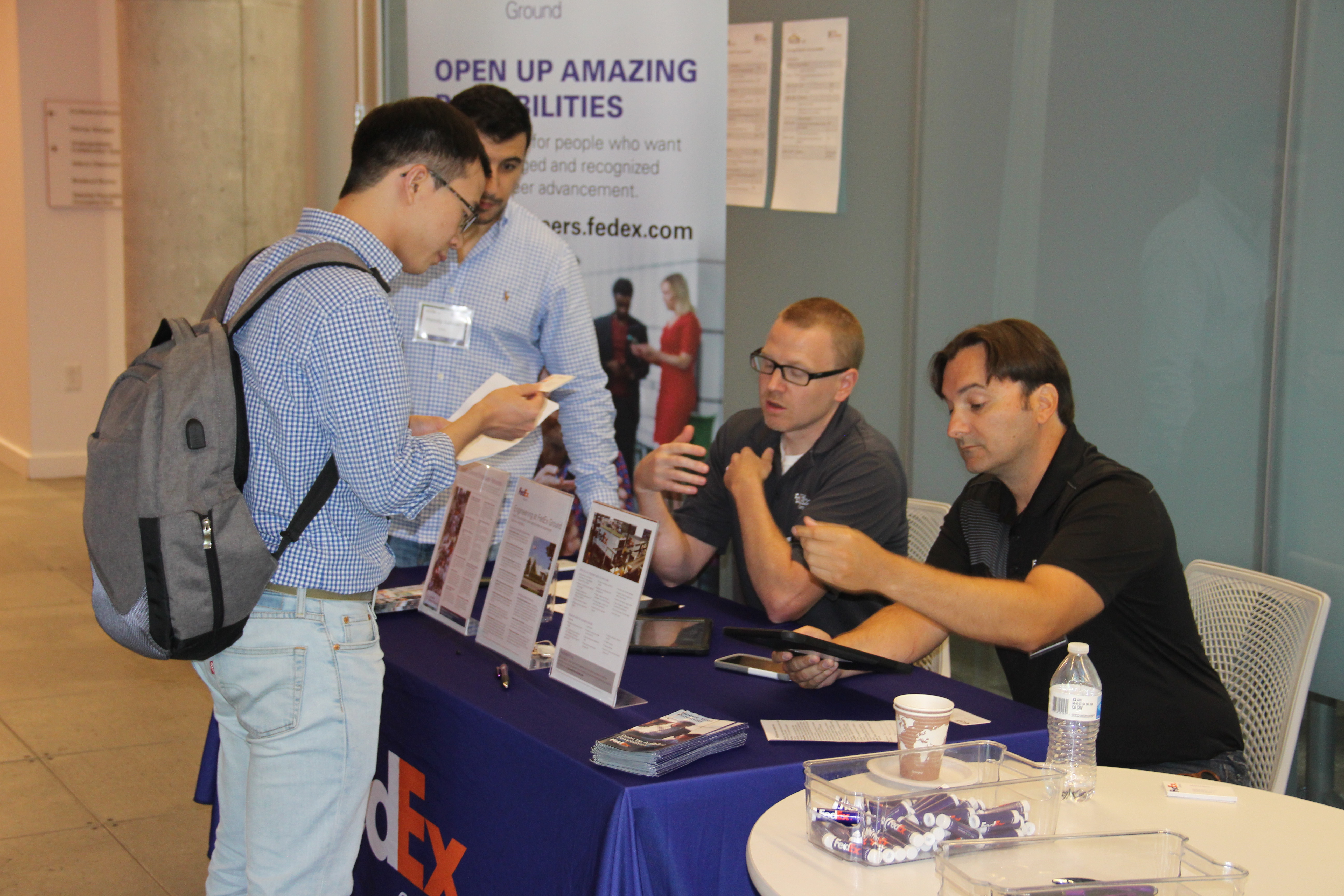 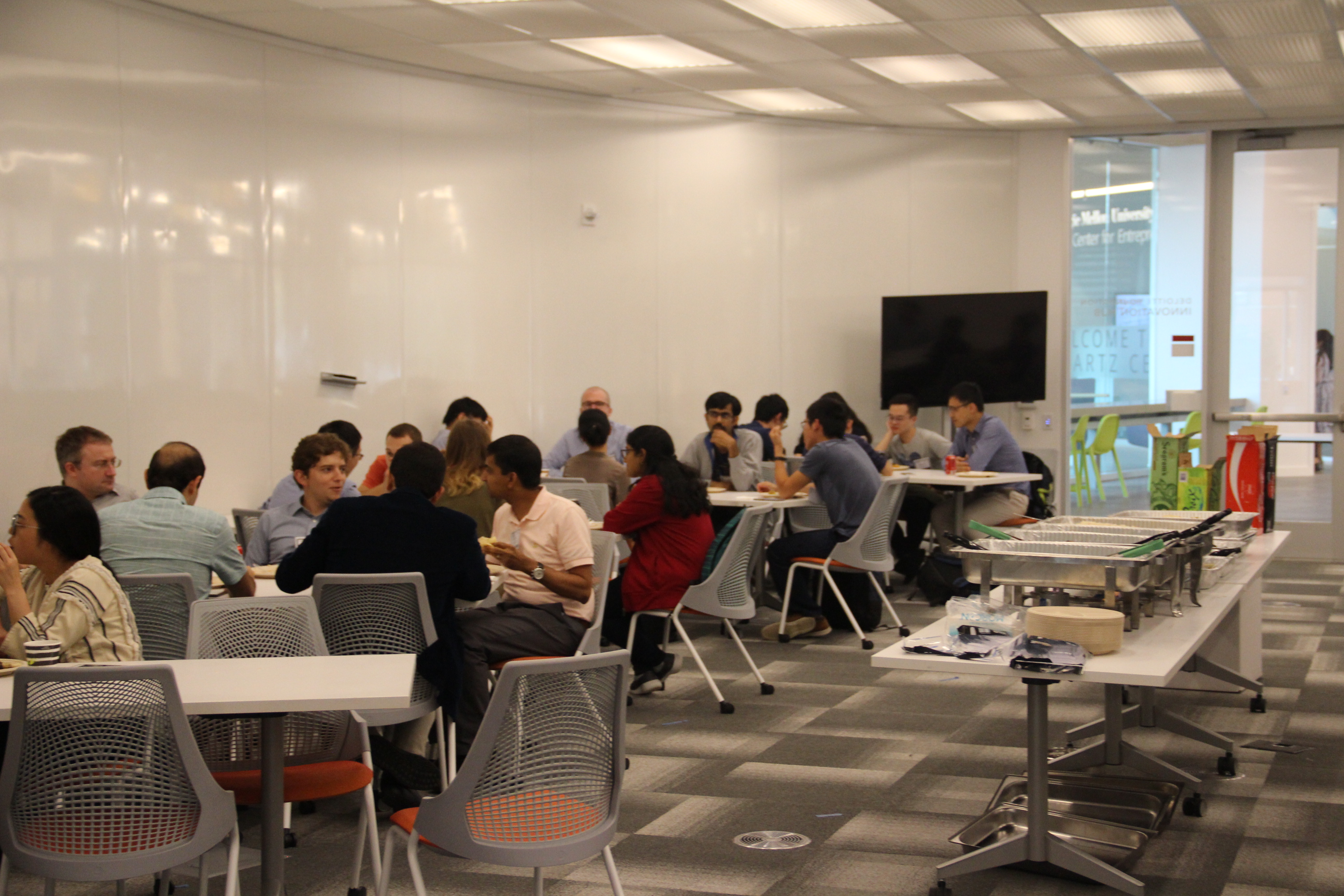 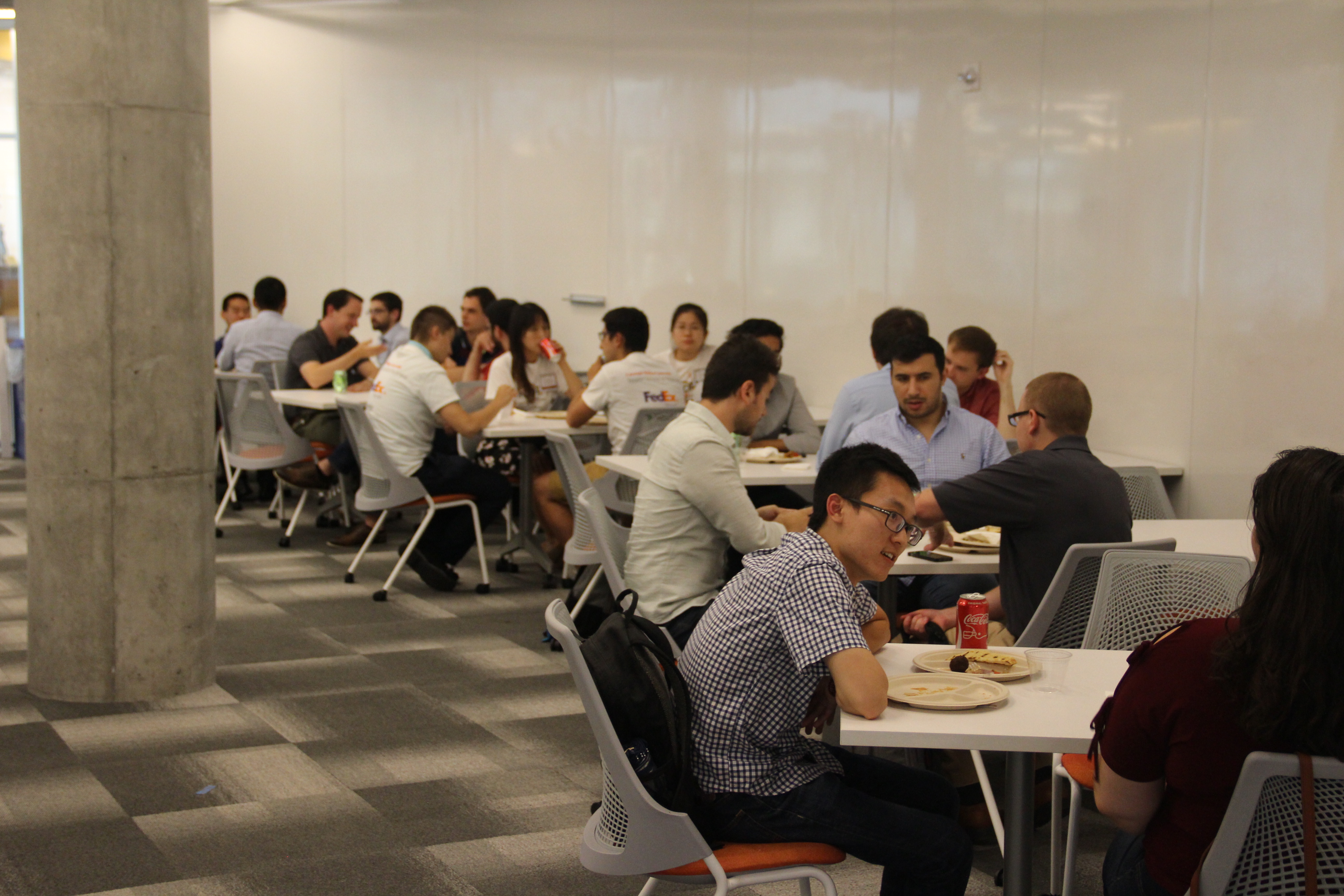 Continuing our tradition, we wrapped up the first day of YinzOR with a delicious Turkish dinner.

The second day of YinzOR 2019, August 24, started with a healthy breakfast, and morning session speakers. 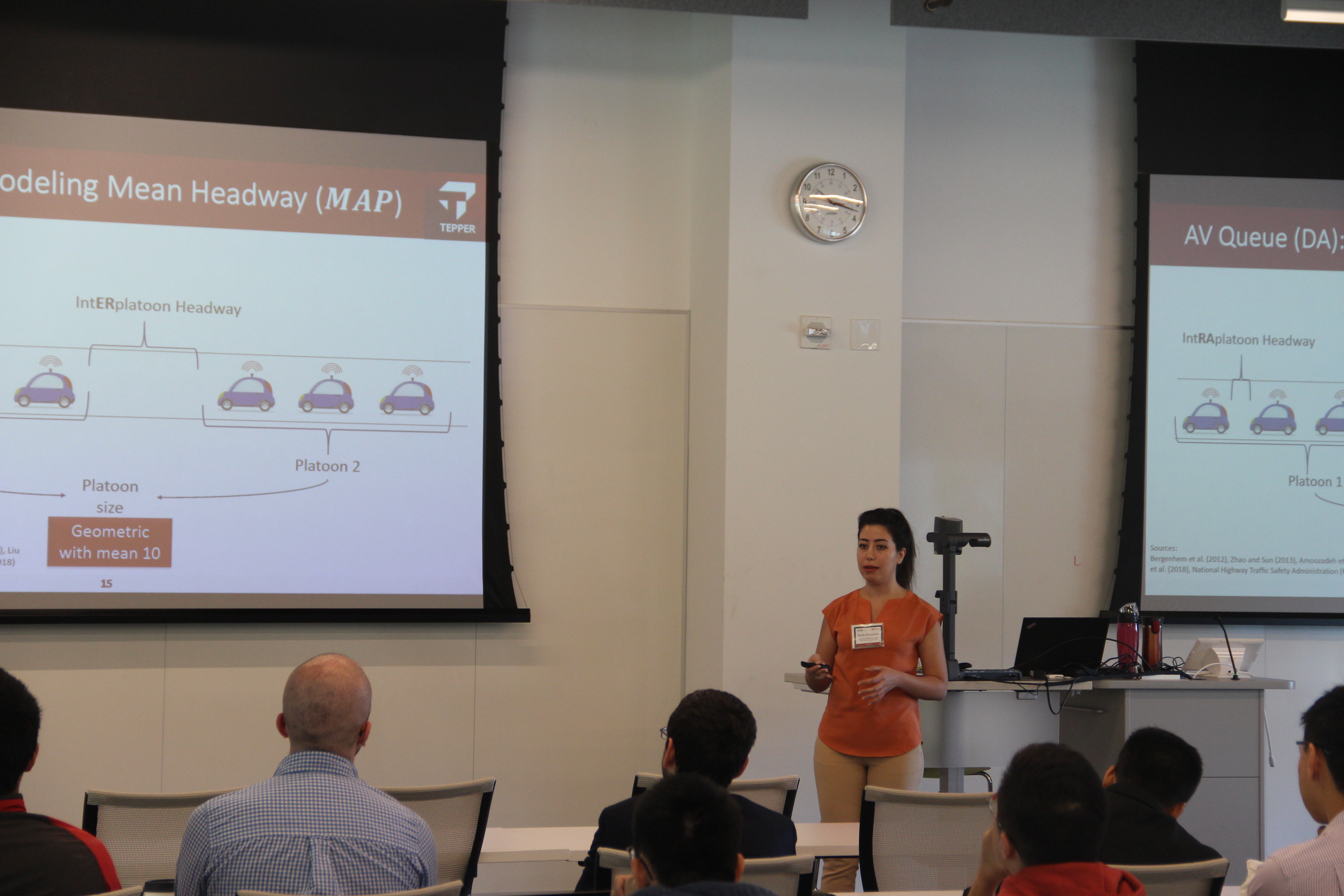 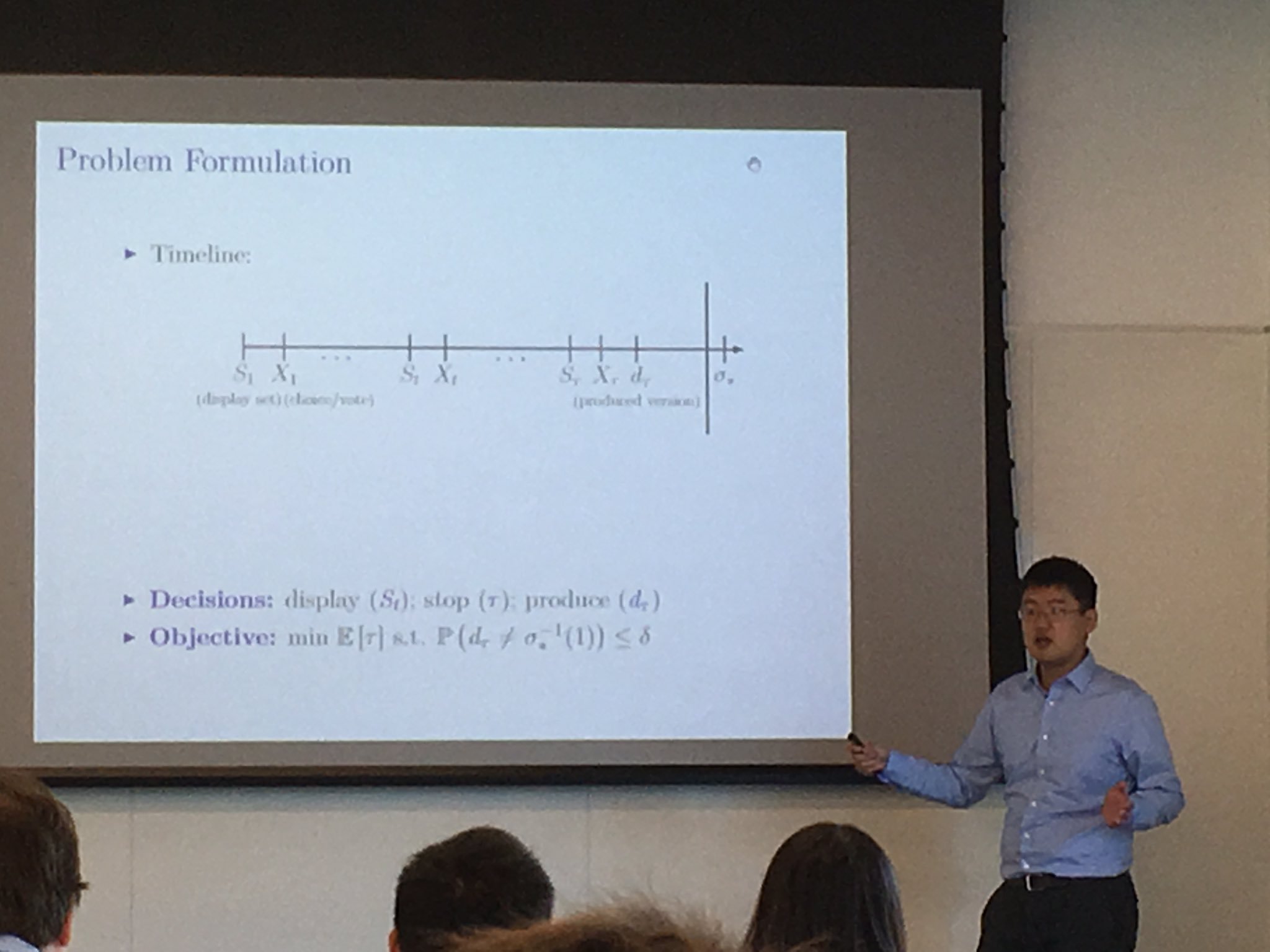 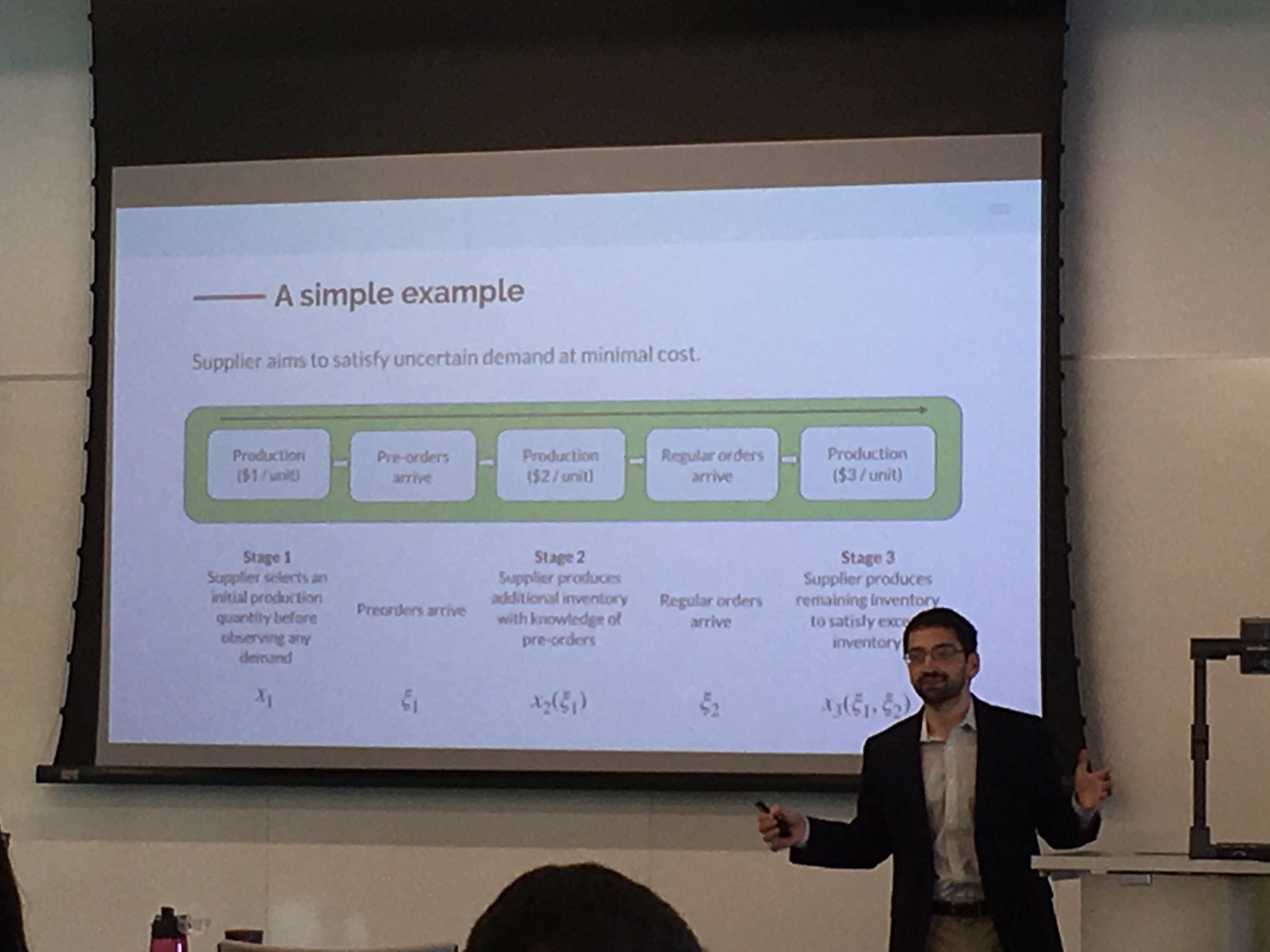 Neda talked about the potential of autonomous vehicles to reduce traffic congestion with a queueing model. She said that a fleet of autonomous vehicles can move in larger platoons, hence improving highway utilization. Yifan talked about learning the preferences of earlier customers to personalize the assortment of products. Brad presented his work on dynamic optimization with side information and he explained a new data-driven approach to multi-stage stochastic LPs.

After three regular-track talks, we had a coffee break to refresh our minds and continue with the second featured talk of YinzOR which was given by Daniel Freund (MIT Sloan School of Management).

Daniel discussed a simple condition for guaranteeing constant regret in online decision making which has nnumerous applications in the online versions of bin packing, knapsack, and revenue management.

A nice long pasta lunch served as a tasty divider for day 2 of YinzOR, in the Deloitte Foundation Innovation Hub of the Tepper Quad. 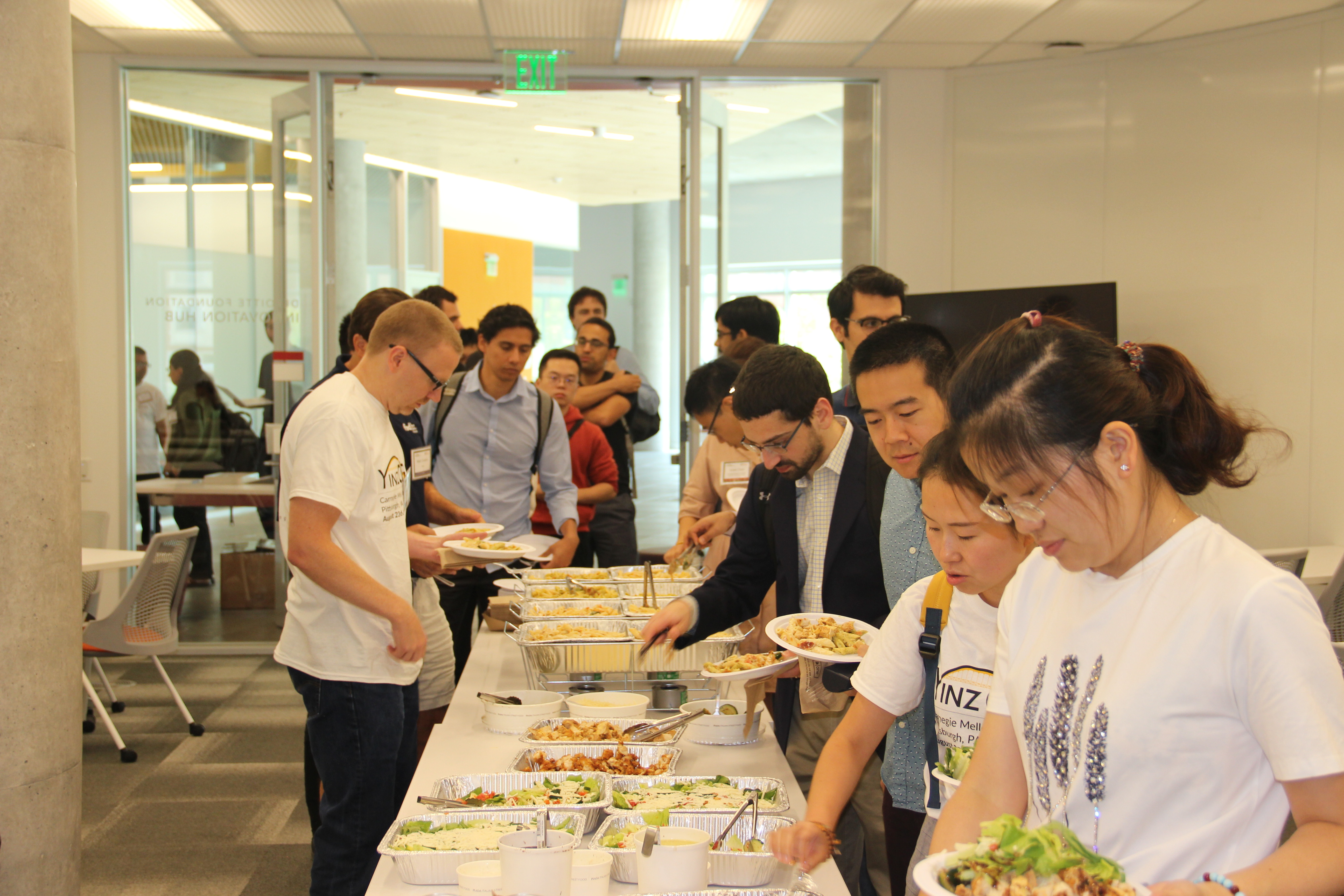 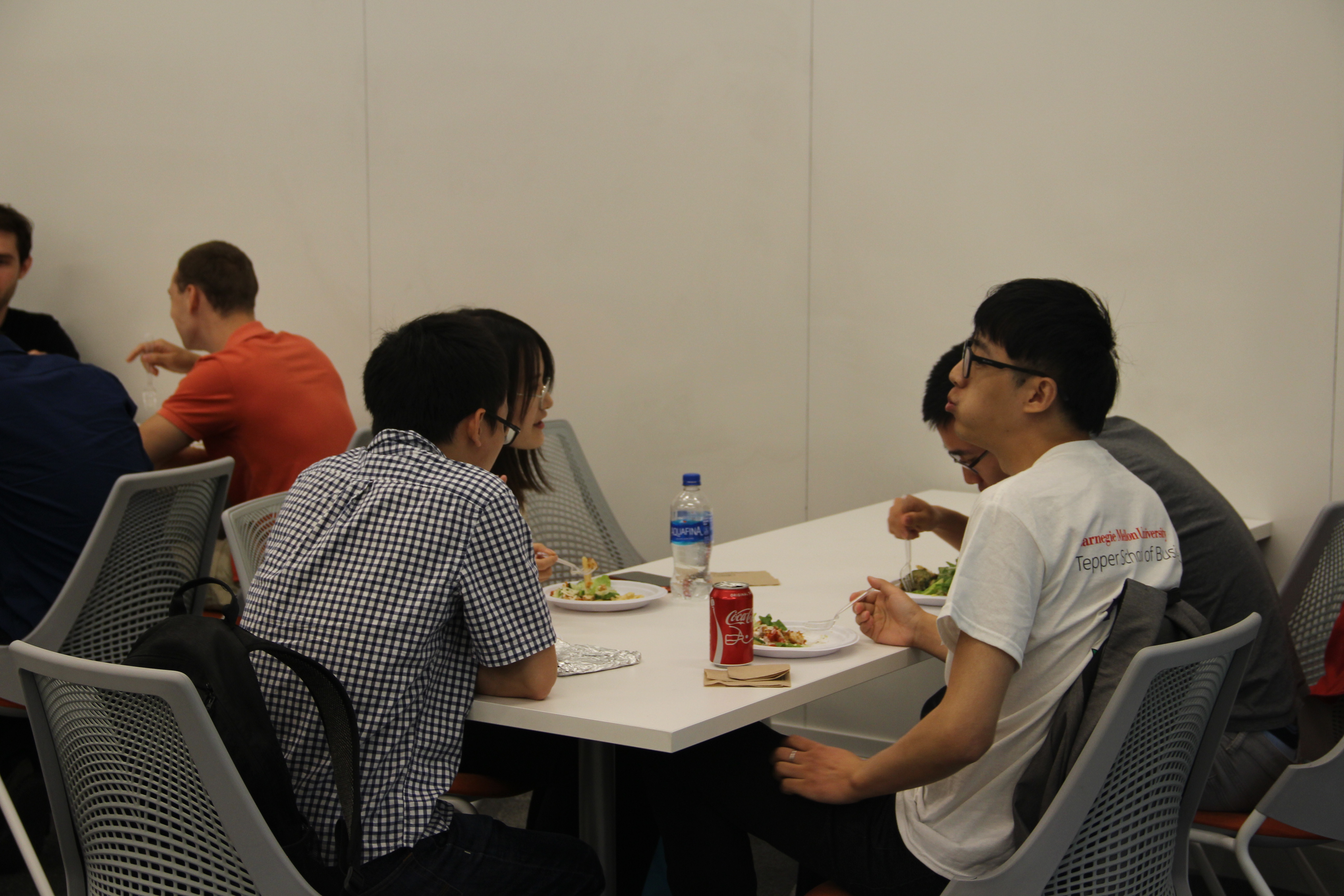 After lunch, it was time for the newly-introduced flash talk competition of YinzOR 2019! 8 participants gave 5 minute talks on their research, but with a little flavor: taboo words. Each participant was given 3 taboo words just before their talk to challenge them to describe their research without getting into technical details. The flash talk competition had participants from Carnegie Mellon University, Cornell University, University of Pittsburgh and Kennesaw State University. 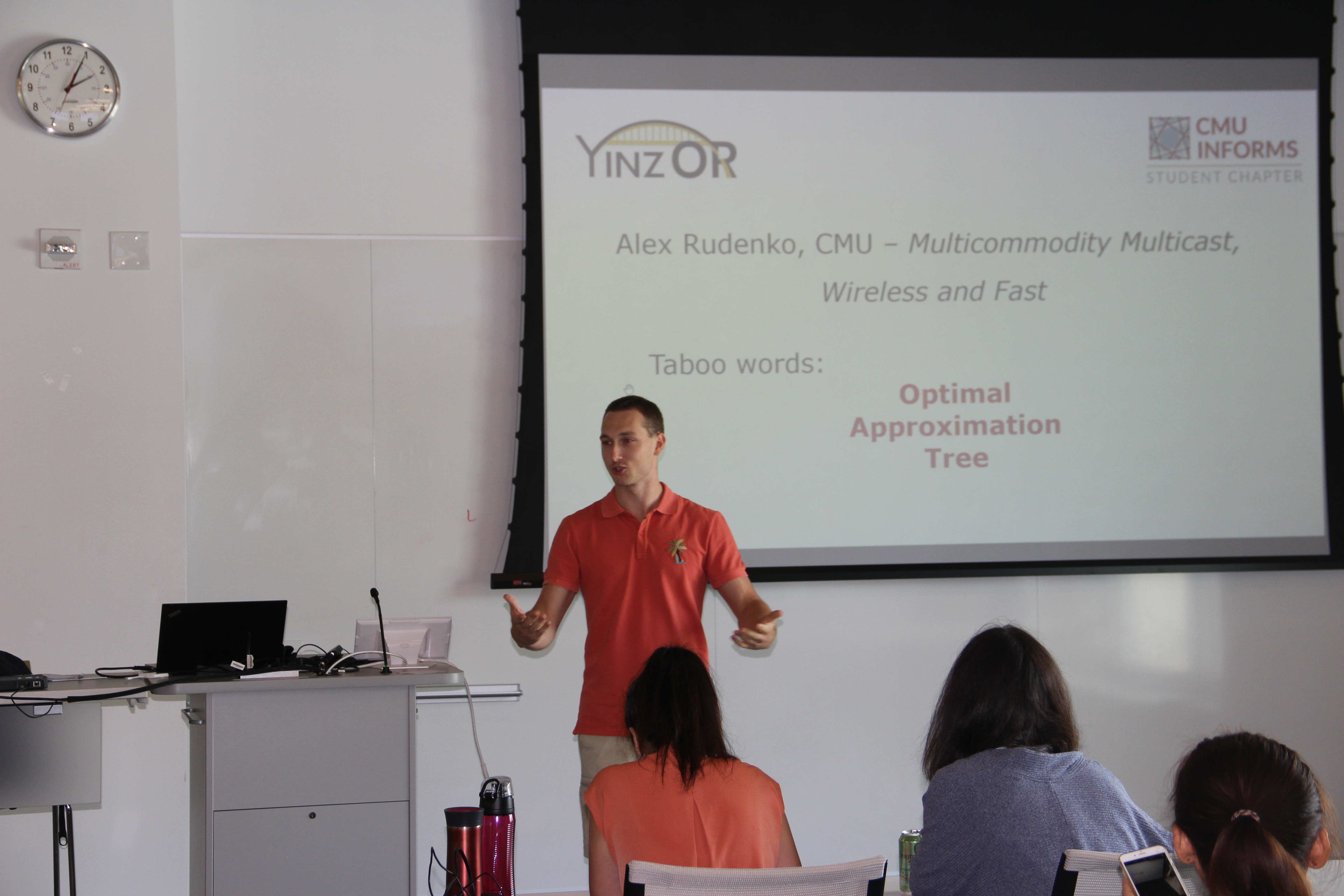 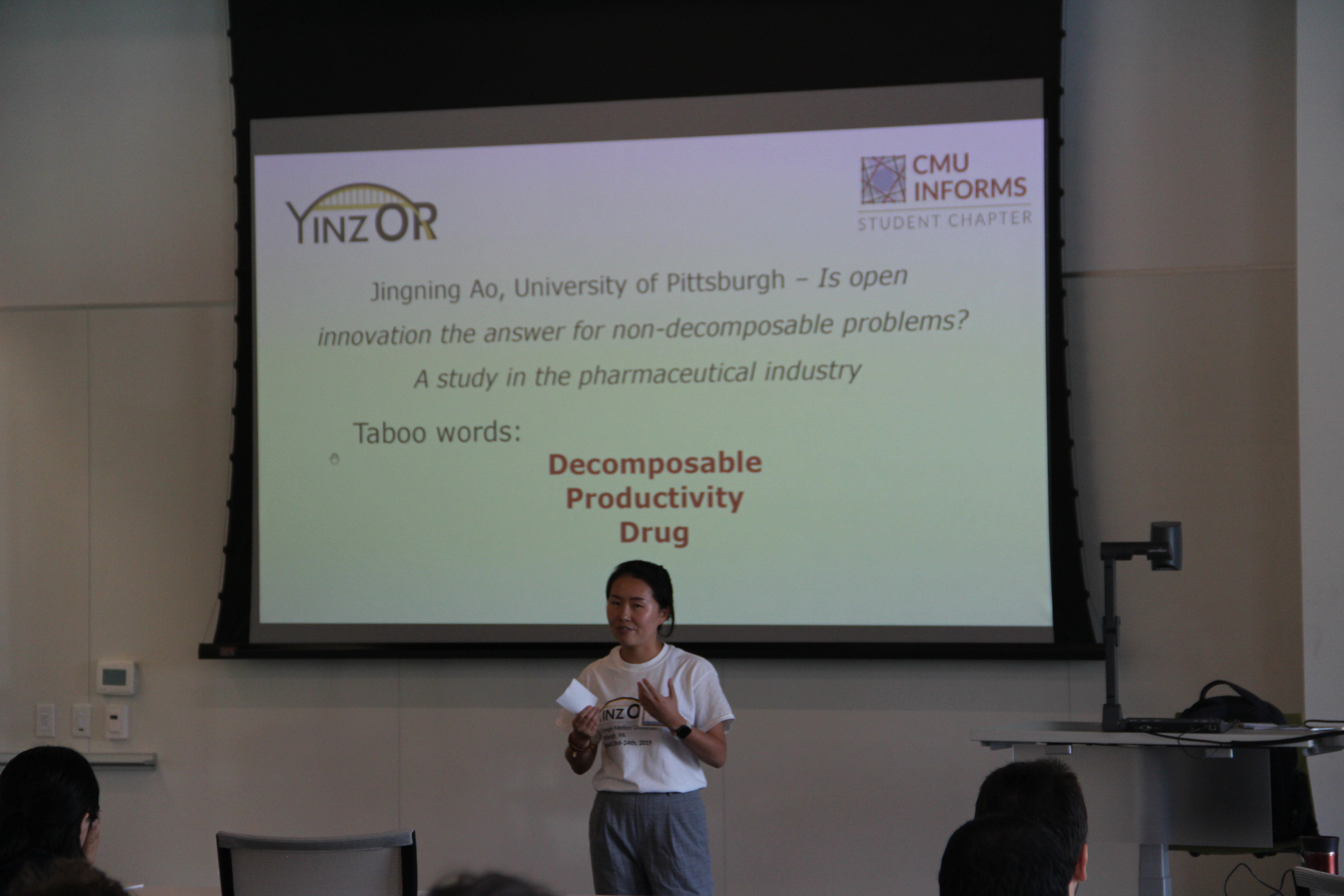 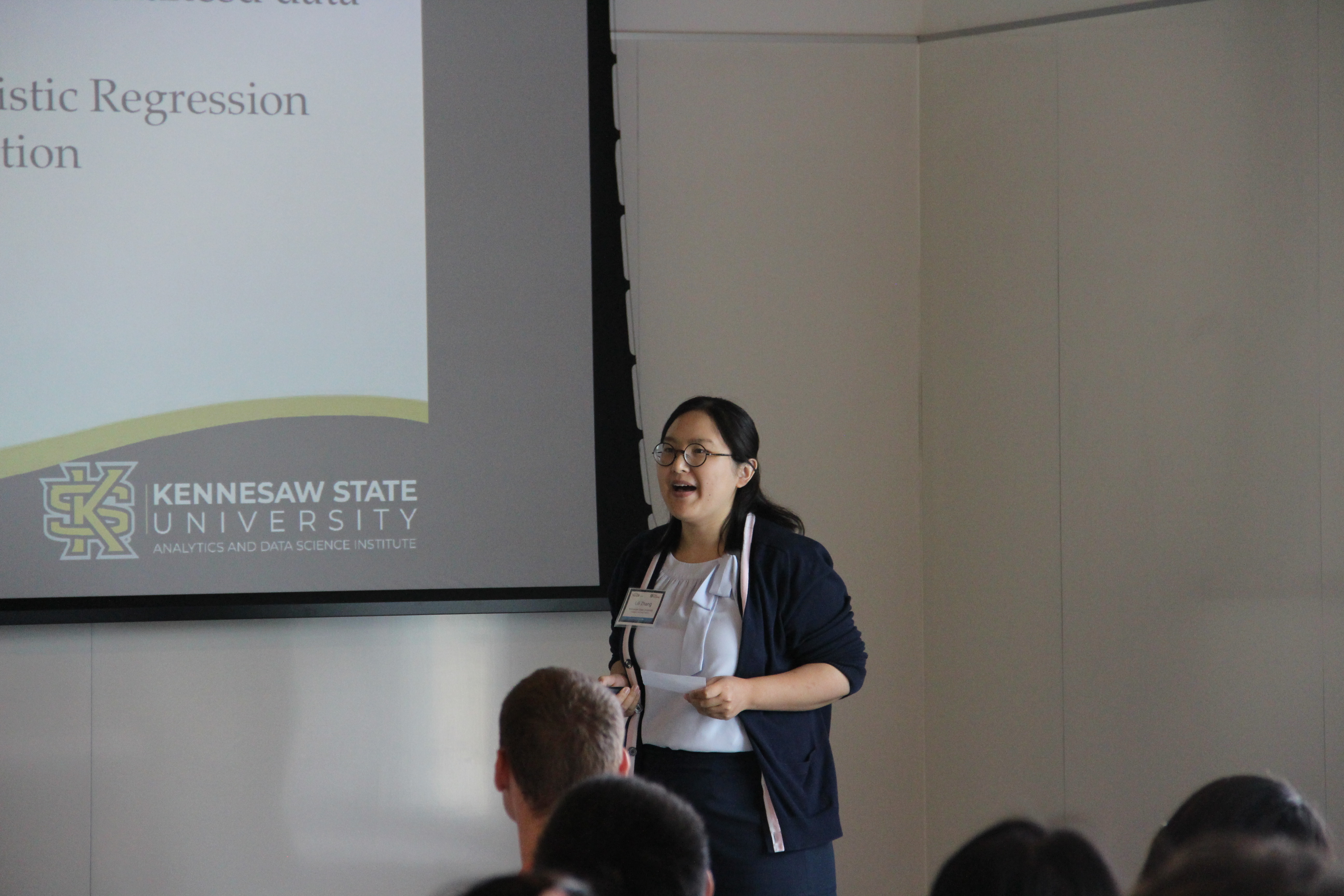 The three winners of the flash talk competition were Arash Haddadan and Alex Rudenko from CMU and Billy Jin from Cornell University.

Flash talk competition was followed with a coffee break, one regular-track and final featured speaker of YinzOR. 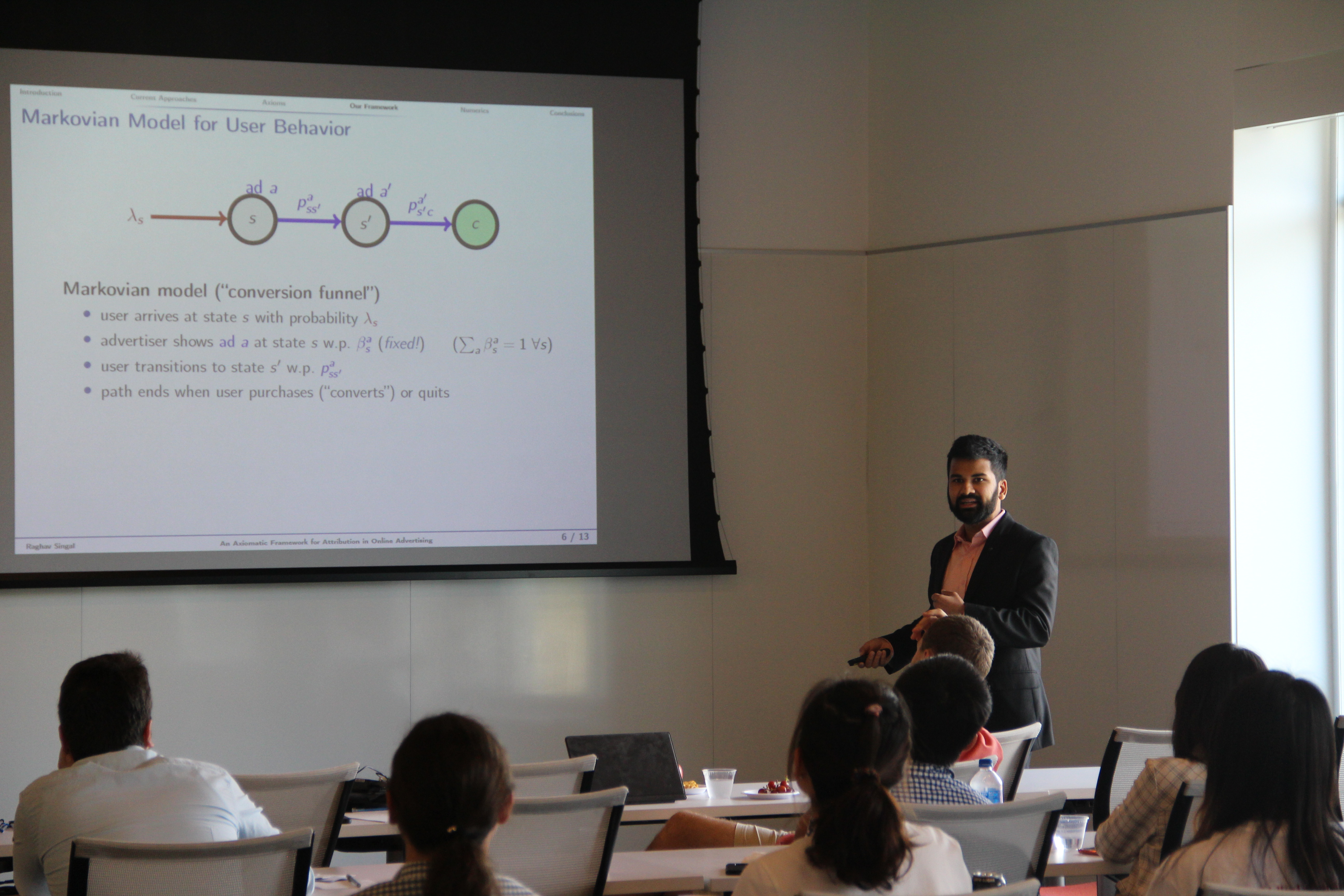 In the final featured talk, Thiago Serra (Bucknell University) (one of the founders of our student chapter) closed the session with his work on characterizing the expressiveness of a piecewise linear neural network by bounding and counting its linear regions. 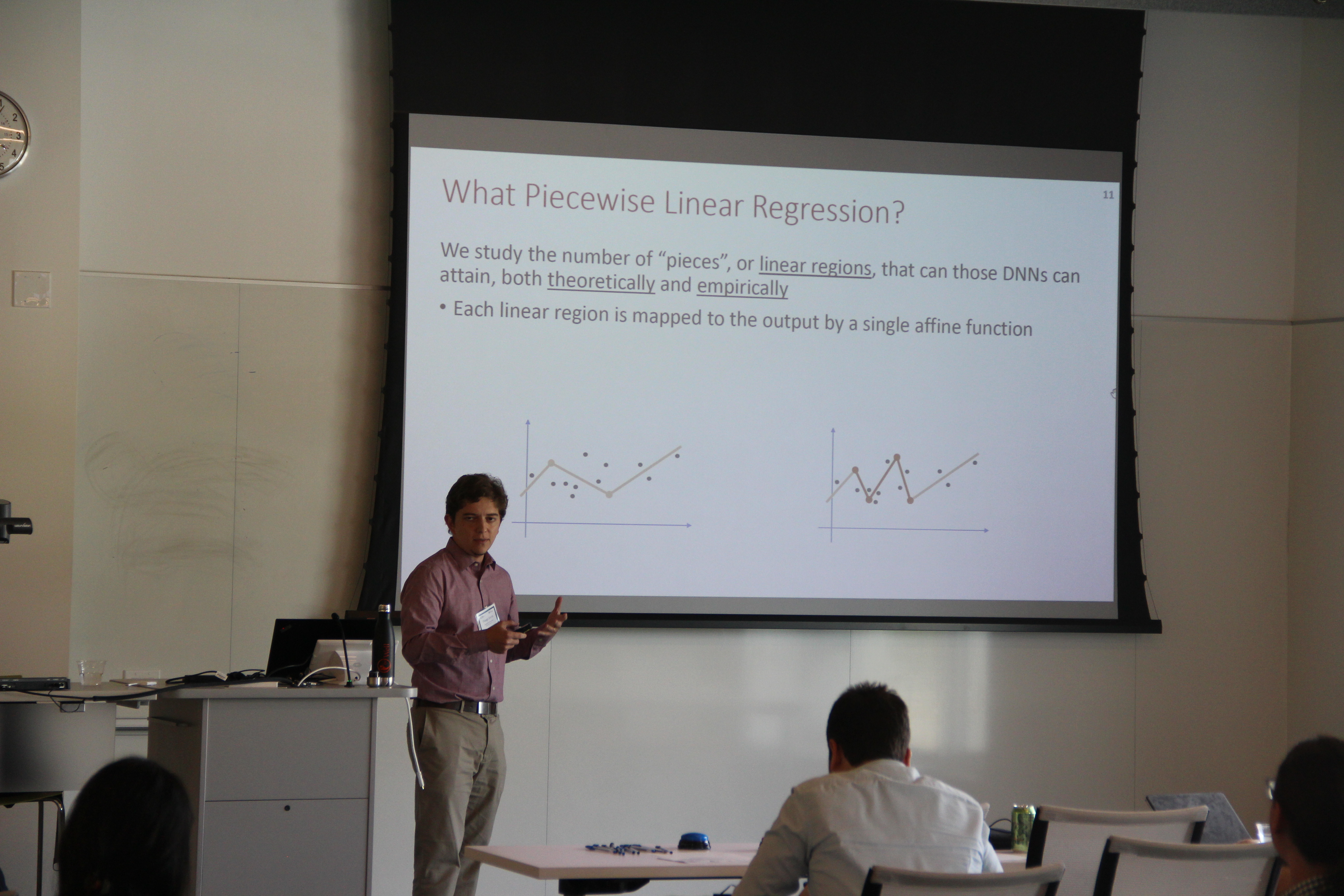 Following Thiago’s talk, we had the awards ceremony for poster and flash talk competition winners. Prof. Fatma Kılınç-Karzan announced the winners and handed in their award certificates. 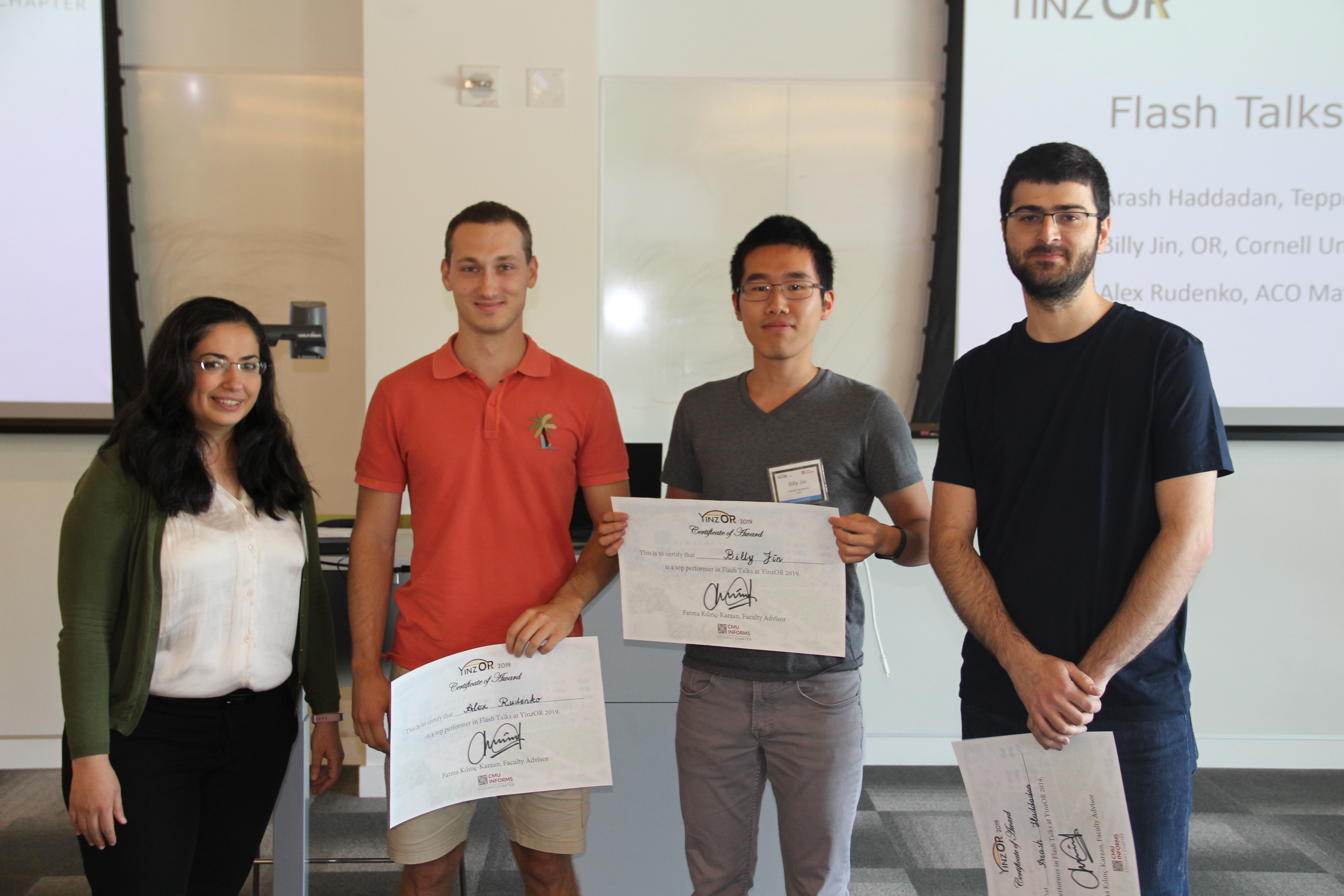 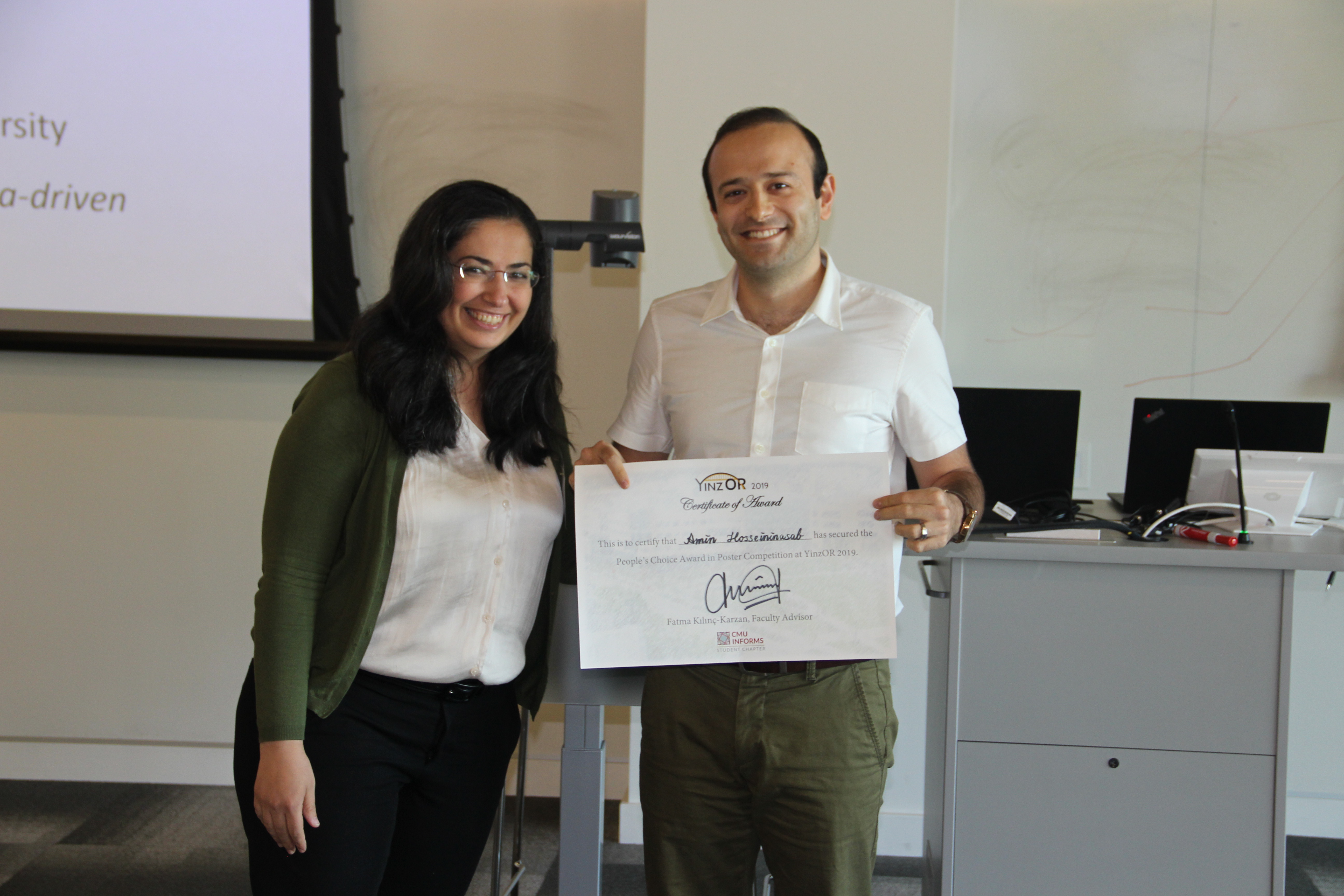 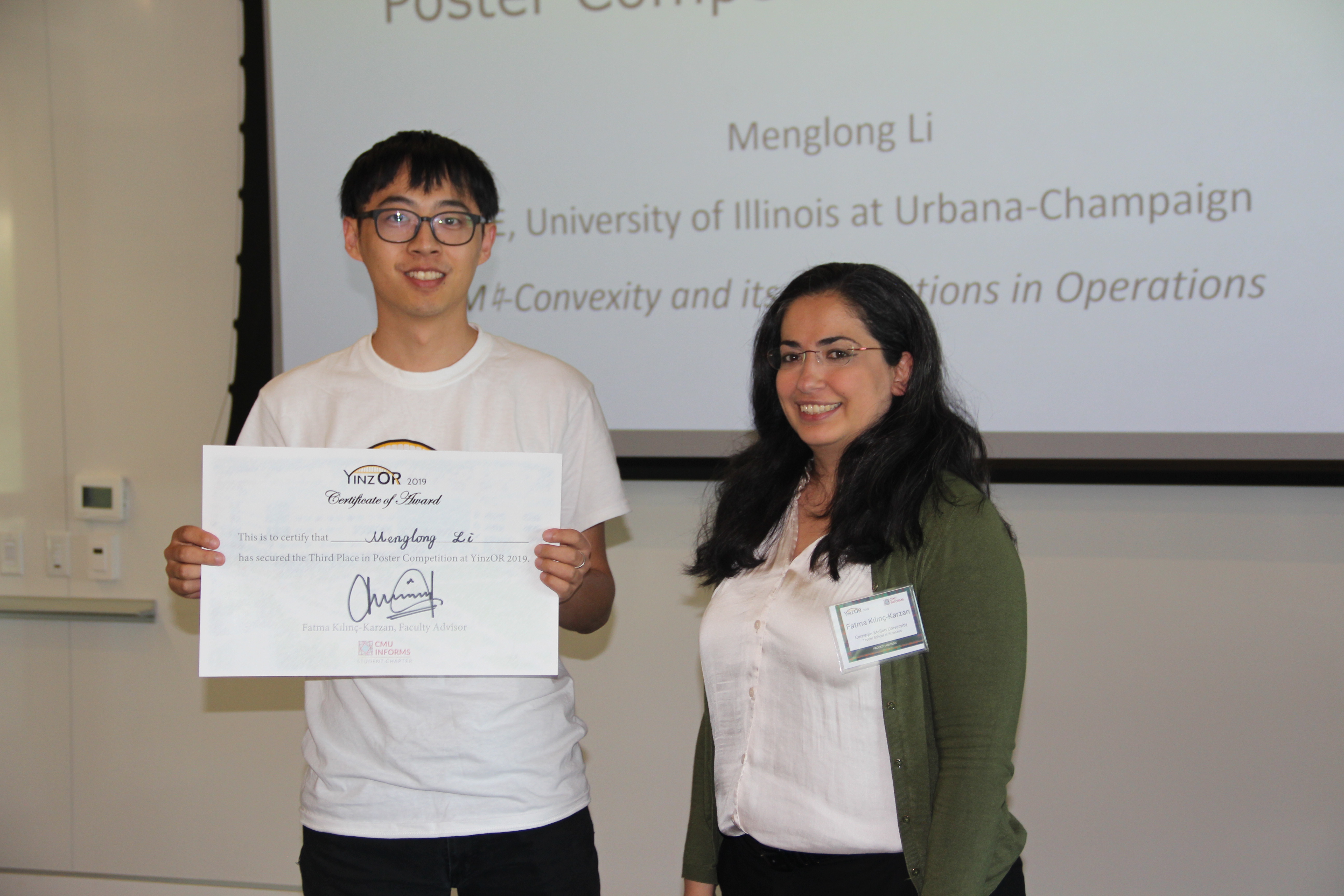 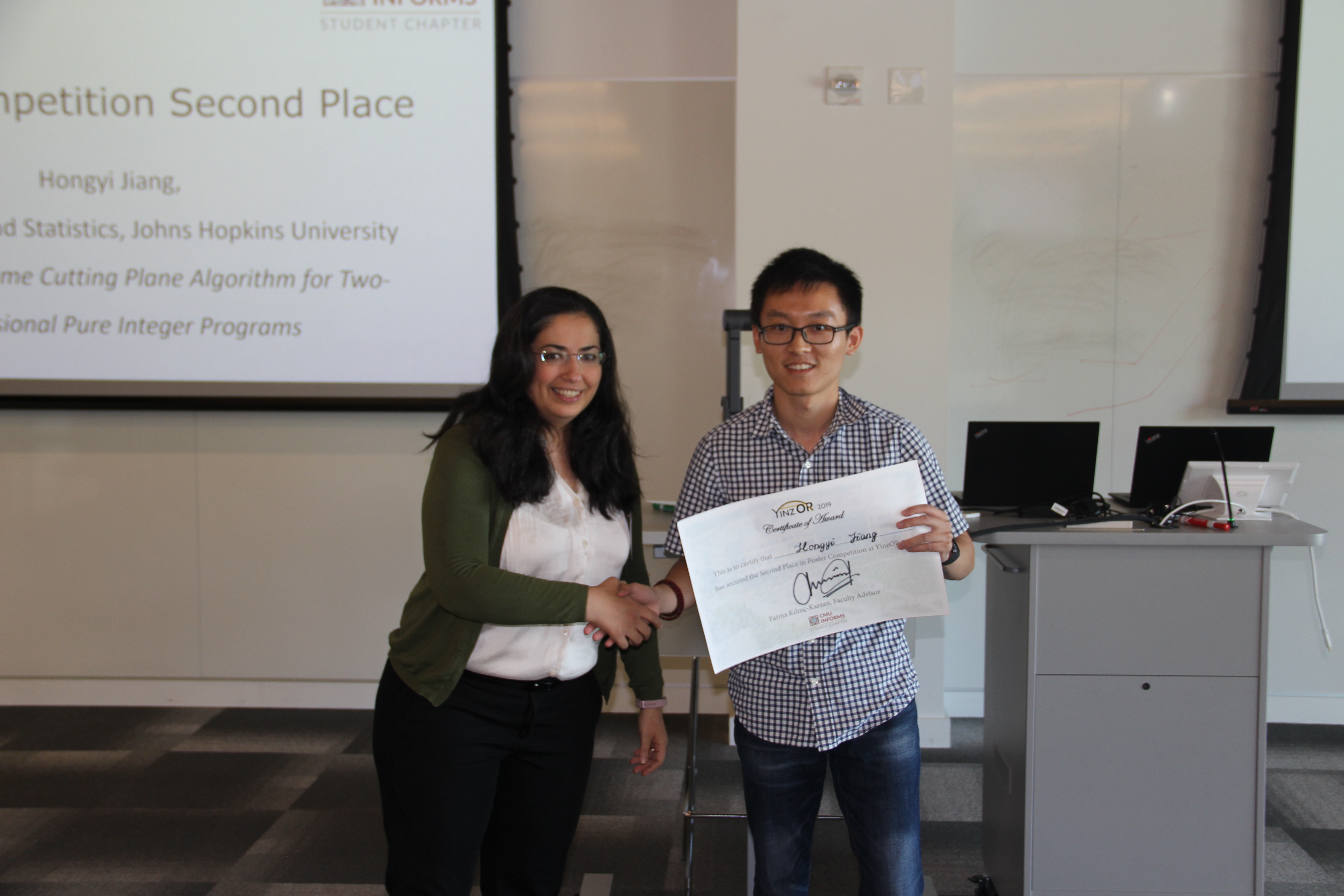 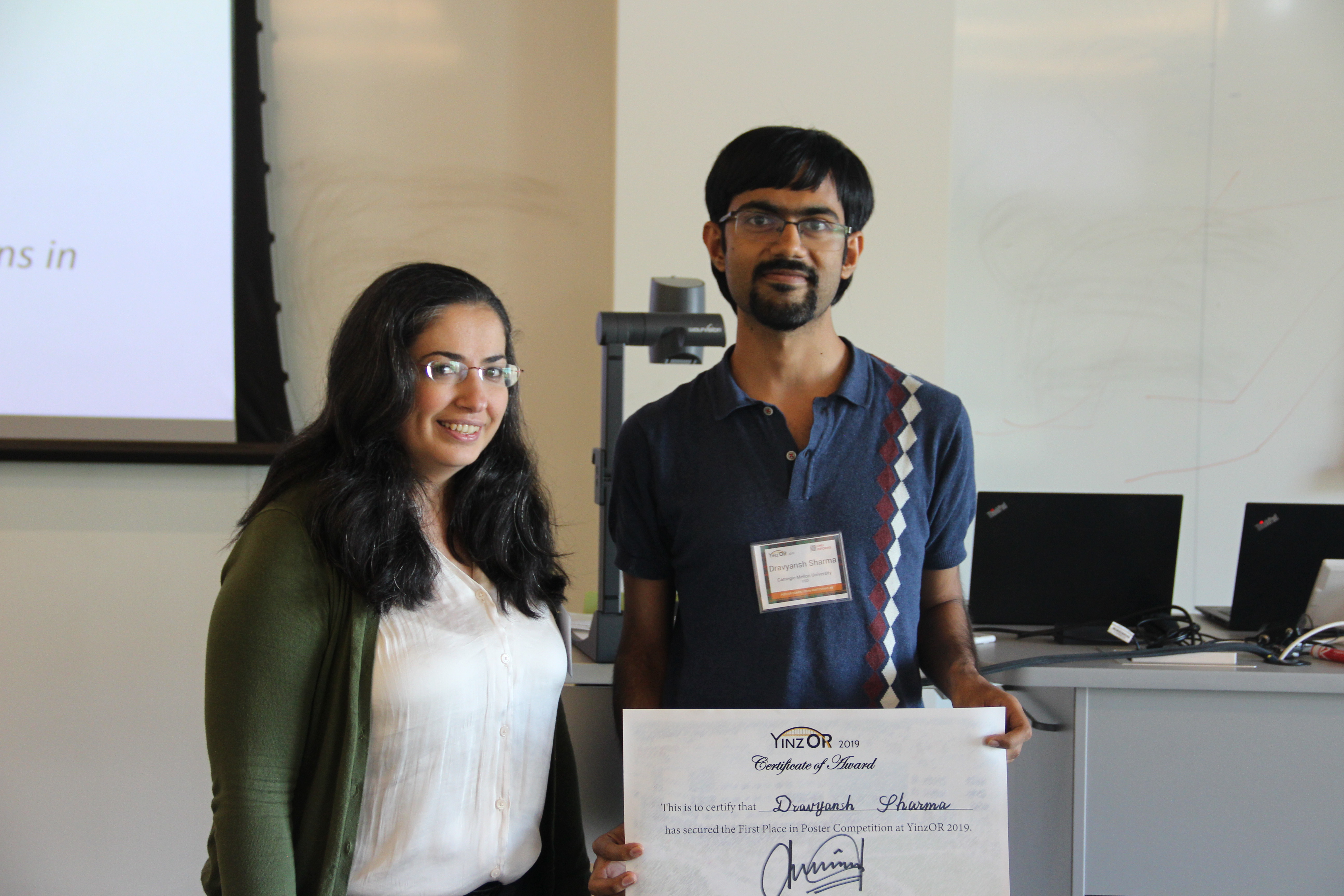 After the closing remarks from the chairs of YinzOR 2019 Violet Chen and Ozgun Elci, the conference ended with the most important event of all: Happy Hour. It was held in the biggest balcony of the Tepper Quad, where the participants enjoyed a nice view of the beautiful city of Pittsburgh, and discussed ORMS (and life!).